The rating system in ETT applies to ranked multiplayer games as a measure of approximate relative skill, based on the Elo system of chess ratings.

Elo is a system where the rating difference between players is used to predict their likely results. As such, two players differing by 100 rating points are predicted to have similar disparity of results (the higher rated player winning 64% of games) no matter whether that's between players rated 2500 vs 2400, 1600 vs 1500 or 200 vs 100.

Players start at a rating of 1500. Previously players started at the ratings floor of 0, which led to a greater range of real skill being clumped at the lower ratings than intended. Changes to this system have caused the rating distribution to be more normal.

To avoid one player harvesting many points from a player they know they can consistently beat, in a 24 hour period an entire series of games between two opponents can at most result in double the elo change of a single game. The rating result from a single game can at most be 32 points for a massive ratings underdog with no previous games in the last 24 hours.

For a given opponent, your Expectation Factor of 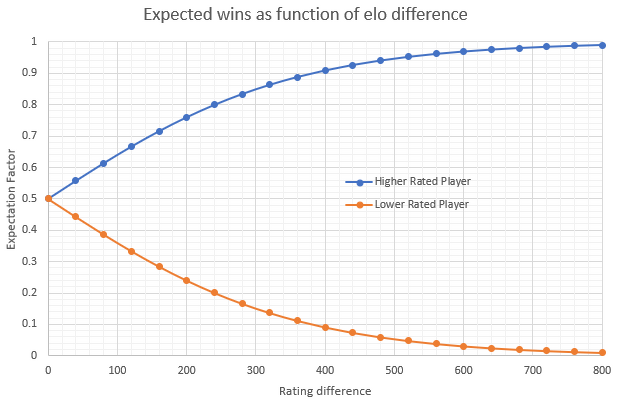 For ratings purposes, the results between two players are treated as a series until there has been a 24 hour break between games.

n = number of games in the series

Your change in elo for the overall series will be K * ( W - E ). W-E has a range from -1 to 1, and K ranges from 32 from one game to an asymptote of 64 after many games, so the maximum elo change up or down from one game is 32 and the maximum from a series of games without a 24 hour break between them is 64.

Between equally ranked opponents, E=0.5 so W-E ranges from -0.5 to 0.5 and so the winner of one game gains 16 points and the loser loses 16 points, and the maximum changes from a series of games without a 24 hour break between them is 32.

In any case, the closer the results (W) are to the expectation facter (E), the closer W-E is to 0 and the less the elo change to both parties.

As a result of this, your opponent's expectation factor determines how many points you can take from them, multiplied by 32 for a single match and 64 for a series.

No matter what the previous results are and what the players' rankings are, if you are in game n of a series, the points at stake (i.e. the difference in rating between winning and losing for both players) is always k/n. e.g in game 4, k=60 and k/n=15, so either party will be 15 points better off from winning that individual match than they would be from losing.

Less than 24 hours passes before their next match, so even though they have played other people and A is now rated 2024 and B is now rated 2166, it is considered part of the same series and points changes are based on that series and expectation factor.

They play one third and final time without playing any other matches (again before 24 hours have passed since their last match against each other), with A winning again. k=64*(1-1/8)=56.

If they were to play another match now, it would become again part of the same series with k=64*(1/16)=60 and adding to the existing tally. Instead, let's assume they don't play at all again for over 24 hours, including other players, and match against each other again. This starts a new series with a fresh expectation factor based on their new rating difference, 2167-2023=124:

Community content is available under CC-BY-SA unless otherwise noted.
Advertisement